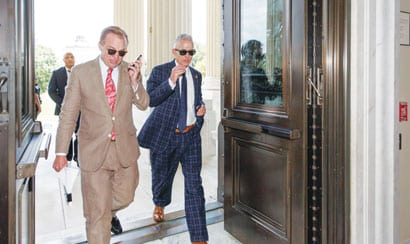 GOP Threaten to Shut Down Federal Government Because of Planned Parenthood

WASHINGTON — 28 House Republican lawmakers, all men, are pledging to do everything in their power to defund Planned Parenthood, even it means shutting down the federal government in protest.

In a letter circulated this summer by Rep. Mick Mulvaney (R-S.C.), the congressmen pledged to vote against any bill that funds the federal government if it includes money for Planned Parenthood.

Planned Parenthood receives about $500 million in government funding, mostly through Medicaid and a federal family planning program. The money is used to subsidize birth control, cancer screenings and other women’s health services. The longstanding Hyde Amendment prevents any federal funds from being used to pay for abortions, but Republicans have been trying to defund Planned Parenthood over its abortion services since 2011.

Sen. Ted Cruz (R-Texas) is leading the effort in the Senate to hold up the must-pass federal budget bill in a bid to defund the family planning provider.

Republicans don’t have the votes to defund the organization this year, but the House Republicans could potentially stall the government funding bill on its own.

“If we shut down government, it will be because you have willful Republicans who are prepared to take the government hostage to attain their ends,” House Democratic Whip Steny Hoyer (D-Md.) told reporters on Tuesday. “It will not be a stumble; it will be a considered objective, and a number of them have said so publicly.”