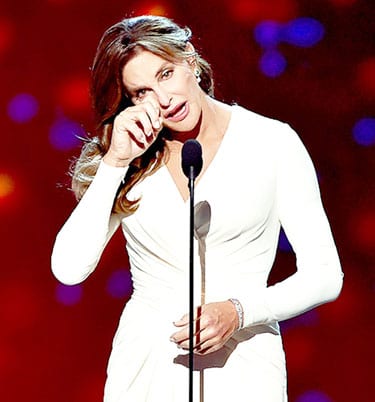 Wednesday marked the night of the annual ESPN sports awards show, the ESPY’s. The ESPY’s had rarely been anything more than a way for ESPN to showcase their power until a couple of years ago. The Arthur Ashe Courage Award has gone out to the most worthy of recipients: Nelson Mandela, Michael Scott, and now Caitlyn Jenner.

For those who aren’t aware, Jenner is an Olympic gold medalist after winning the Decathlon in 1976. Jenner, though, was born in a male gendered body and was named Bruce. Since 1976 Jenner has accumulated millions of dollars through different business ventures

, and this sum of money contributed greatly to the procedures she received so that she could feel comfortable in her own skin.

Caitlyn Jenner was born into a male body, but she was not a male. Anybody who teases, pokes fun, or criticizes Jenner for having the courage to step

out in public and announce that she would be undergoing a drastic life change doesn’t understand the pain associated with being transsexual in today’s society. Most of us are lucky

enough to be born into the body that mirrors the gender that we are, but that doesn’t mean that everybody is born that way. Caitlyn did not consciously choose to feel like, or subconsciously feel like a female

; Caitlyn is a female.

A lot of people on social media are calling the award a publicity-stunt by ESPN and don’t believe that Jenner deserved the award. They claim that an athlete beating cancer is a more deserving award winner

and it is appalling that Jenner won instead. Arguing whether one athlete had to overcome more adversity than any other one is pointless, arguing about the decision is a publicity-stunt. Both are athletes, both had to hurdle an obstacle that they did not choose to put in front of them.

With the outpouring of support for the horrifying number

of transgendered teens that commit suicide every year, we need somebody like Jenner to come out and let everybody know that being Trans is indeed something that many people go through. There are support groups

out there; there are people who are willing to fight each and every day for the Trans community. These teens commit suicide often because they feel ostracized and alone in society. Unfortunately, people continue

to share internet memes poking fun at Jenner and her transition, disregarding that fact that they likely know somebody in the same position as Jenner was before she came out.

While Jenner’s quest is largely a positive, there are some negatives that emanate as well. The vast majority of the people that make up the Trans community do not have the money that Jenner has, so they can’t afford to pay for millions of dollars’ worth of procedures to look the exact way they want to. Most of the community needs to visit a doctor

that pokes and prods them with veiled (and sometimes not so veiled) insults just to hopefully get prescribed the drugs that they need to help them transition.

We are progressing in a lot of ways as a society, maybe it’s time we accept that not everybody is exactly like we are, and that is okay.

Better than okay, it is beautiful.

The Milwaukee LGBT Community Center is located at 1110 N Market St. Milwaukee, Wisconsin 53202. They can also be reached by phone