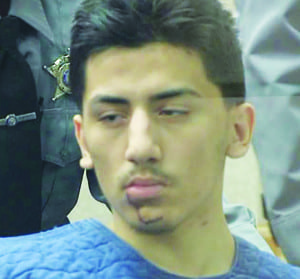 MILWAUKEE -Ruben Garcia (20) was charged with fatally stabbing his infant daughter and another man during an argument.

The criminal complaint says that Garcia went in a rampage when he saw a video posted online showing one of the victims playing with his daughter.

Garcia and the mother of the daughter broke up because Garcia was abusive toward her during their relationship.

According to the complaint, Garcia wanted to get back together, when she refused, Garcia pulled out a knife and began stabbing her.

Police said Garcia stabbed two men who were also in the house. One of the men, Paul Kucharczyk, died as a result of the attack.  The medical examiner said Kucharczyk was stabbed 44 times.

Court documents say that Garcia then pleaded with the woman to come out of the bathroom. When she refused, police said Garcia entered a bedroom and stabbed his 5-month-old daughter six times.

The baby, Alexia Dailey, died at the scene.