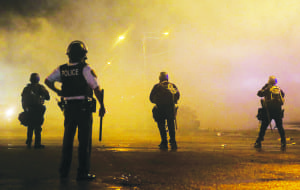 MILWAUKEE — Ferguson, MO has been the center of attention not only in the nation, but around the world as comments from world leaders point to the death of an unarmed Black teenager, who was shot and killed in Ferguson, MO by police.

Now Milwaukee citizens have joined in the protest in solidarity with that city.

Organizers are making a statement that they understand the frustration of Ferguson citizens pointing out that Black men in Milwaukee have died under similar circumstances.

Many in Milwaukee expressed frustration that the police officer who killed Michael Brown has yet to be criminally charged.

Milwaukee Police Chief Ed Flynn says he’s paying close attention to the message. “It’s disturbing to see that level of breakdown, and to see that rift develop between the police and their communities and so all of us are watching,” says Flynn. “All of us are obviously looking to learn lessons.”

Flynn acknowledges there are problems. “No major city police department in an environment as complex and stressful as ours is going to avoid error or avoid controversy,” said Flynn.