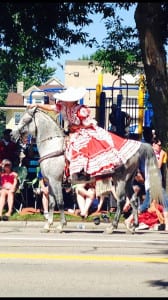 Racine – The owner’s of the La Tapatia restaurant located at 1951 Mead Street in Racine, posted a statement on their Facebook page declaring that they will no longer participate in Racine’s 4th of July parade.

La Tapatia stated on their Facebook page that, “our experience in this years 4th of July was by far the worse experience ever.”

La Tapatia owners went on to state that they felt “harassed by the director of the parade”.

The statement goes on to say that La Tapatia owners felt the director harassingly followed them around and they complained that the director yelled at their children who were part of La Tapatia’s parade cohort.

La Tapatia owners go on to say, “she was by far the rudest director ever yelling and screaming at us and putting her hand in our face stating exactly ‘You will not be invited next year’…”

La Tapatia owners appear to have beat Racine’s 4th of July organizer by announcing, “so we are letting our customers know that we will never attend @cityofracinefourthofjuly this was the last year we will be there. We want to thank each and everyone that watched us and allowed us to be a part of your 4th of July. God bless always!”

Racine residents have been treated for many years to La Tapatia’s dancing horses during the 4th of July parade, next year’s parade will be noticeably different if La Tapatia does not attend.